Next to the Northern Trieste district, the Quartiere Coppedè is a surprising complex of buildings and streets, situated in a relatively small area, which has its center in the square called Piazza Mincio. If you happen to come to this part of Rome, you can’t miss a short stroll around this unique and bizarre place. It’s a rare pearl of liberty architecture, and something that is completely different from any other parts of the city.

Designed by the visionary artist and architect Gino Coppedè, the area consists of 18 palaces and 27 buildings and villas. The district was built between 1920 and 1930 and it’s a celebration of various different architectural and artistic styles, from ancient Rome to the bizarre Goth, liberty accents and also an oriental inspiration. This place has a hypnotic and sometimes obscure charm. The architect’s creativity was influenced not only by a number of artistic currents and mythological symbology, and he combined them all giving a new, and almost supernatural, meaning to the concept of architecture.

After Gino Coppedè’s death, the district was completed by his brother in law Paolo Emilio André. The whole place has a fairytale feeling, with green ivy covering the walls, together with figures and marble sculpture that seem to be able to come to life just after you’ve passed by, and then again become still, if you stop and stare. 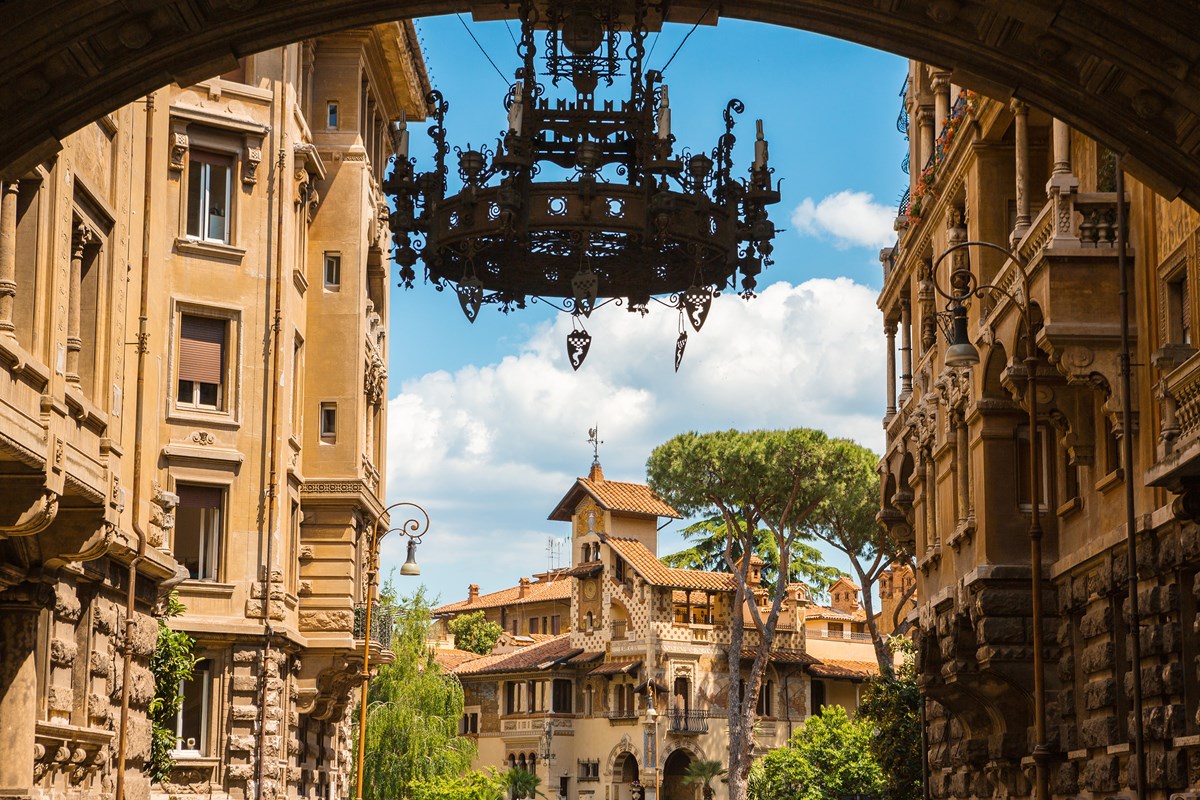 You will enter the Coppedè through an arch that connects two buildings. On the right hand side, there is a Madonna holding Jesus, while underneath the arch there is a huge wrought iron chandelier (which lights up at night!). There is also a decoration which resembles the Holy Grail, together with a number of apotropaic figures, aka images or objects that are used to ward off evil.

In the middle of Piazza Mincio, you will find the Fontana delle Rane (the Fountain of the Frogs), a marble piece that has been restored to its original white splendor. This fountain, with its fairytale and eclectic style, well sums up the art of Coppedè.

On the right hand side, you will see the Palace of the Spider, which has an arachnid depicted on the front central stained glass window, together with columns and arches in Assyrian-Babylonian style. The extremely complicated design is an homage to the industriousness of the spider.

This unique “concept district” is one of a kind, and has also been signed by its author, on one of the columns of the buildings. Today, these palaces are home to embassies, a school, and some are privately owned. The interiors feature precious roman style mosaics and colored glazed tiles. One of the chalets was the private residence of one of the most famous opera singers of the XX century, Beniamino Gigli. 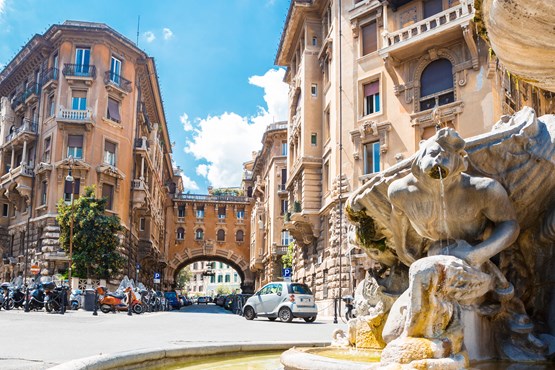 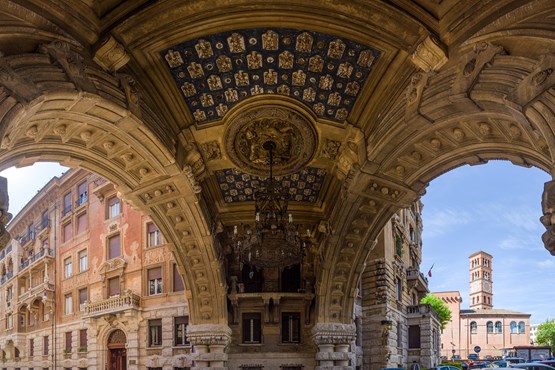 The Villa of the Fairies

One of the most notable complexes is the Villa of the Fairies, which are three chalets sharing the external walls. The architect wanted to pay an homage to the culture and art of the cities of Rome, Florence and Venice, and created a mixed style featuring mosaics and decorations of Romulus and Remus as well as the portraits of the poets Dante and Petrarca, together with the lion, the symbol of Venice. An ensemble that is actually quite hard to describe, but when you see it you’ll discover an unusual harmony, in all its eclectic forms and themes.

The villas are privately owned. Here, the cost of the estates is equal to if not higher than the one in the historical center, reaching about 7,000 Euros per square meter. Plus, the chalets are usually fairly big. There is currently one on sale (600 sq/m), for a total of 4.5 million. Just in case someone fancies a pied-a-terre in Rome! 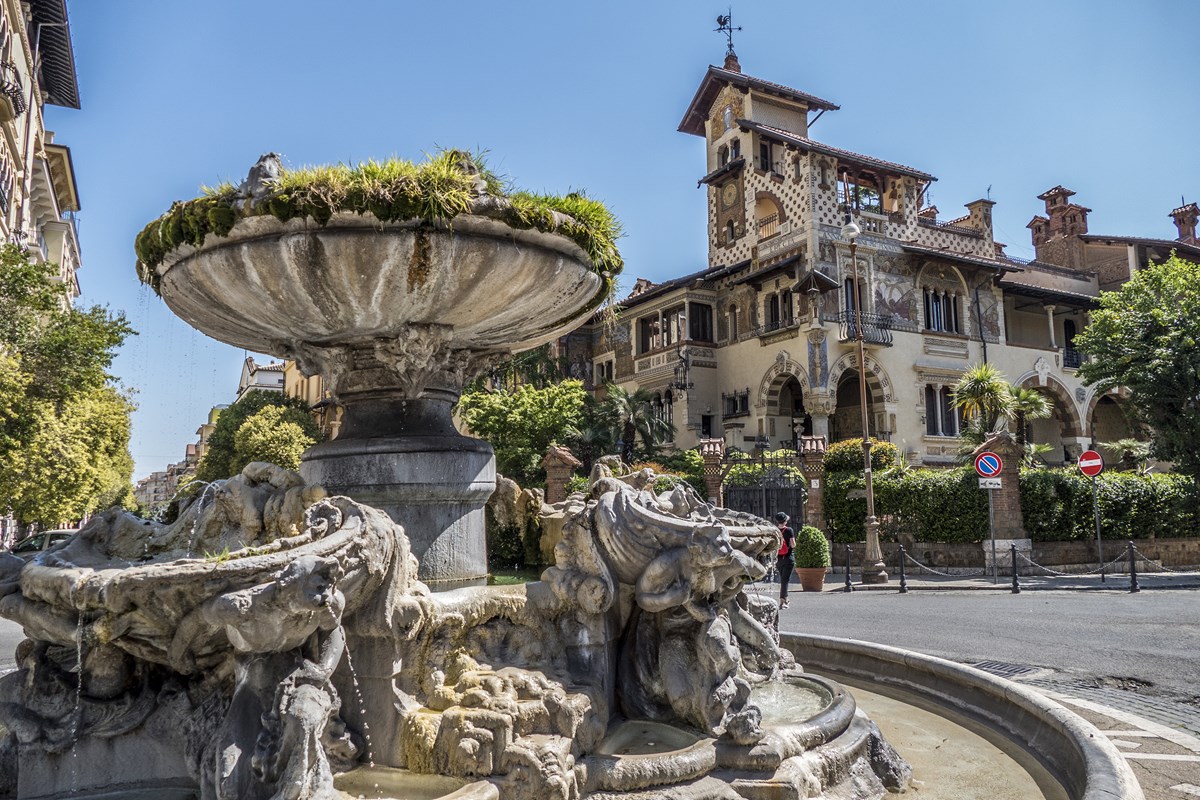 Esoteric Mysteries, Movies and... The Beatles

Apparently, Gino Coppedè belonged to the Masonic Society and used specific symbology, such as decorations of the Templar tradition and columns similar to the ones in the Solomon Temple. There are interpretations that suggest that the whole district is an initiatory journey, which starts the moment that you enter the arch and continues with the vision of the masks, knights and mythological figures, forming part of the exterior decorations of the buildings.

While taking a stroll though these streets, which are almost deserted, as the residents are very few in numbers, you will start to feel the captivating and strong charm of the place. For sure, this atmosphere was considered very cinematic by more than one film director, who decided to use Coppedè as  the setting for their motion picture creations. The most famous of all is probably Dario Argento, known for his cult horror movies. The director actually lives in the nearby Parioli district, so the area is somehow “home” to him.

On a completely different note, there is a fun fact about the fountain, starring no less than the Beatles. The Fab Four were touring Italy in the summer of 1965. They had a gig in the nearby club “Piper” (which is still operating by the way). The night was so hot that, after the concert, still in their show’s outfits, they plunged into the fountain and started playing with its refreshing water features. Unfortunately we couldn’t find any pic or footage: mobile phones had not yet been invented and apparently no paparazzi were in sight. Is it just a legend? One thing's for sure, the Coppedè has a mesmerizing effect on anyone. Still, please do not imitate the Liverpool band, otherwise a sure fine will suddenly bring you back to reality!

How To Reach the Coppedè

The area lies in the road blocks between the streets Via Tagliamento, Via Arno, and Via Ombrone. You can arrive here from the city center by catching buses 86 or 92 and disembarking at the square Piazza Buenos Aires. The entrance to Coppedè is at the corner between two streets: via Arno and Via Tagliamento. 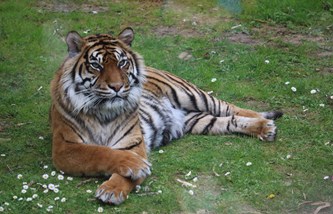 The Giardino Zoologico di Roma, or better known as Bioparco, is a kid-pleaser zoological garden in Rome. It has several animal species and it is located in the Villa Borghese Park Read more......