A Egyptian looking pyramid in Rome

The Pyramid of Cestius is one of those structures which is small at a distance yet gigantic up close. It is so large that you will keep looking upward trying to look at the top! People usually expect that this pyramid is not as big as the ones in Egypt, but this one is 36.5 meters tall (almost 120 feet) and located right in the city.

Unlike the Egyptian pyramids, it is noticeable that this one has a pointy end. This is because two alleged reasons. First, Romans were able to use bricks, concrete and marble in its construction and they managed to make it more sturdy and edgy. Secondly, many paintings recorded the Giza pyramid as if it had a pointier end than it has in reality. And it is said that these paintings were the ones used as a model to build the Pyramid of Cestius.

Other scholars say that the Pyramid of Cestius was built using the Nubian Pyramids as a model, since the city in which they were (Meroë, Sudan) was conquered in a few years prior to its construction. 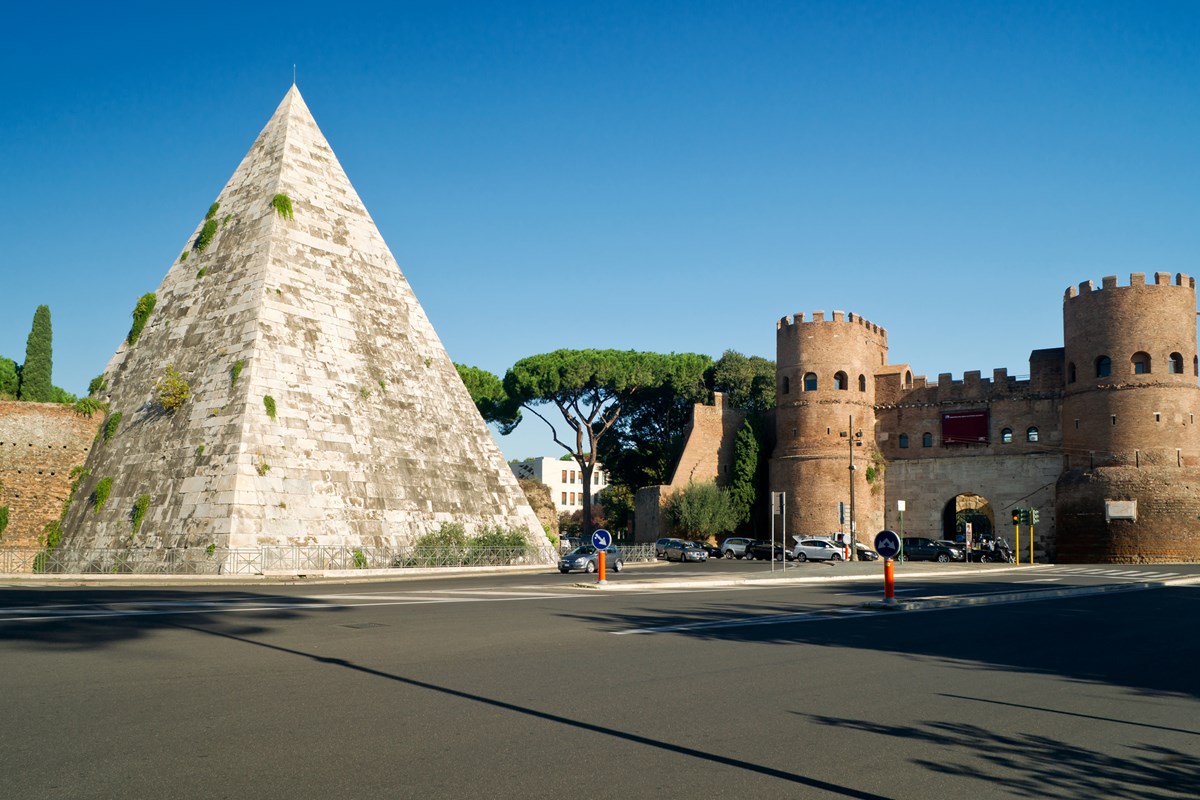 This pyramid was built as a tomb for Gaius Cestius, a wealthy magistrate who requested to be buried there. The pyramid has the inscription
C (aius) Cestius L (ucii) F (Ilius) EPULO, POB (lilia tribu) PRAETOR, TRIBUNUS PLEBIS (septem) VIR EPULORUM”. This translates to “Gaius Cestius Epulo, son of Lucius, praetor, plebeian trubune, member of the septemvir epulones”
Basically, this inscription states that Gaius Cestius was a Praetor and tribune (both are titles for magistrates and officials in Ancient Rome), and member of the "septemvir epulones", a select group of officials, deputized to organize games and lavish banquets during religious celebrations.

The pyramid was built in less than 330 days, according to his will. One testamentary clause clearly stated that, in case of a delay in the completion of the monument, the heirs of the deceased would have not been eligible for the large Cestio's inheritance. On the west side of the pyramid there is another inscription that reads: “The work was completed, in accordance with the will, in 330 days, by the decision of the heir Pontus Mela, son of Publius of the Claudia and Pothus, freedman.”

But why is an Egyptian looking pyramid in the middle of Rome?

Did you know that Romans were keen on Egyptian antiquity? On 30 BC, the Romans conquered Egypt and as a result, this brought up the appeal of Egyptian culture upon Romans. This influence can be seen on monuments and structures built throughout the Roman Empire, but it is especially visible on the Pyramid of Cestius.

In fact, nowadays there is a total of 13 obelisks in Rome that were either built by Romans copying the Egyptian style or were directly took from Egypt and re-erected after its conquest. When you go to Rome, a striking sight is to see this pyramid in the middle of regular Roman neighborhood – it is in fact in the middle of an intersection! Of course, this particular structure was not always supposed to be there – back in the day, this used to be the middle of the countryside. You had to go out a little off Rome to see it. 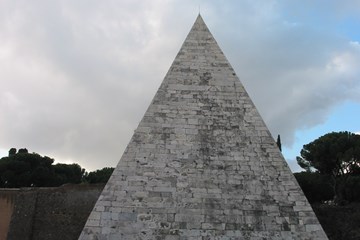 The myth behind the Pyramid of Cestius

This pyramid is contained within the Aurelian Wall and since the wall was well-preserved over the years, the Pyramid of Cestius was also maintained. However, the existence of this pyramid sustained a myth in later years for a very long time.

In the middle Ages, the pyramid was not known as the Pyramid of Cestius – it was called “Meta Remi”. Why? Because out of two, this was the second largest pyramid in Rome. The largest pyramid was called the “Pyramid of Romulus” or “Meta Romuli”, and it was situated near Castel Sant’Angelo (and was completely demolished by the 16th century). Consequently, through time, a myth about how these two pyramids contained the rests of Remus and Romulus (the twin brothers that founded Rome) was spread among the people. Also, a site between the two monuments was believed to be where Saint Peter suffered martyrdom, as it is shown in many paintings, such as the Vision of the Cross by Raffaello, in the Stanze of the Vatican Museums.

The origins of the Pyramid of Cestius were eventually forgotten and it was rumored that this was, indeed, the tomb of Remus (hence the name “Meta Remi”) Also, the inscription became unreadable probably because of the overgrowth of plants, which was the long hidden identification of to whom the tomb was built for.

Eventually, in the fifteenth century, excavations were made, making the inscriptions readable again and finally the truth was out – the pyramid contained the rests of Cestius.

The burial chamber is not open publicly. The tomb of Gaius Cestius can be found inside the pyramid. During the 17th century, two bronzes were found in the pyramid of Cestius and were transferred to the Capitoline Museums. However, most valuable items were stolen and sacked long before then, which raises the question of what was actually inside the place prior to investigation.

Nevertheless, there is a lot of history and even some remains of ancient frescoes can still be found, so it is worth to go and see it for yourself. Today, the pyramid is mainly used as a sanctuary for stray cats. The pyramid of Cestius is located at Piazza di Porta San Paolo.

Close to the Pyramid Cestia, there is the Non-catholic Cemetery, also called the English Cemetery, which, since the beginning of 1800, contains the tombs of those who died in Rome, but were not of Catholic religion. Many were Protestant, such as the poets Shelley and Keats.

To visit the tomb, you need a guided tour. Tickets cost approximately €7.50, and the tour can be done on the third and fourth Saturdays and Sundays of each month. The Pyramid is easily reachable by metro (Line B, "Piramide" station).