Staying in the heart of the historical center of Rome brings you a lot of perks. One of the most notable ones, is that you will get easy access to most of the main attractions in the city. As the saying goes, all roads in Rome lead to the Roman Forum. And in fact, there are countless visitors that flock to the Forum each day, to walk through the streets once stridden by the famous Julius Caesar. During ancient times, the Forum served as the center of life in Rome.  It is where the political, judicial and commercial activities were focused.

Within short walking distance of the Roman Forum, you’ll find Rome’s ultimate landmark, the Colosseum. Destination of distinguished tourists for centuries, it was once described by Lord Byron as the bloody circus of gladiators, while, according to Charles Dickens: “the Colosseum by day, by moonlight, by torchlight, and by all manner of light is as stupendous and as terrible as can be.”

This is the place where the brave gladiators fought against their fellow gladiators and even against all kinds of ferocious beasts. The Colosseum is the most famous and the biggest amphitheater in the world. It is located at the very heart of Rome and is known to be the most impressive structure of all the ruins and buildings of the Roman Empire.

There are a large number of hotels, holiday homes and accommodation residences that you can find at Rome’s center. Most, if not all, of these hotels are just a quick stroll away from each other, and from the most renowned sightseeing spots in Rome. Every hotel is different, according to price range, facilities and accommodation benefits.

We have gathered the top rated hotels in the immediate vicinity of the Roman Forum and the Colosseum. The ratings were based on customer reviews of the top three most distinguished hotel review sites. Here’s a list of the most reviewed hotels, featuring the highest ratings. 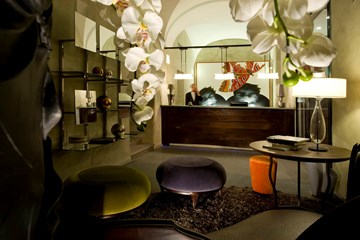 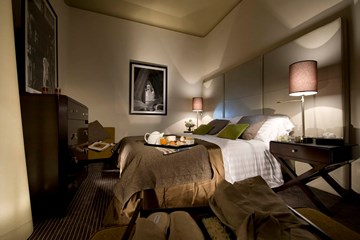 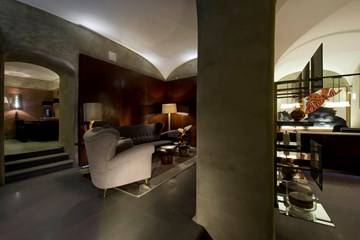 Palazzo al Velabro features a 17th century façade that faces directly on the Arch of Janus (approx VI century B.C.), which was one of the main structures of the sacred and commercial area called Forum Boarium. Besides, from the façade, you can have a quick foretaste of the Temple of Vesta in the Palatine Hill. Its luxuriously and elegantly designed apartments have just recently been refurbished, to offer optimum comfort and satisfaction to its guests.

The hotel has a spacious and well equipped fitness center for sports and fitness enthusiasts. Visitors are also given the opportunity to get in touch with their fitness zone’s personal trainer for workout schedules. For those who want to dine for breakfast, the hotel has an exquisite breakfast and lounge bar where all guests are welcome.

The hotel is well equipped with luggage counters, 24-hour front desk support and information center for city tours. This fully air conditioned hotel also offers babysitting and laundry services. There is also a satellite television unit and free Wi-Fi connection in every apartment and room. The hotel also offers the possibility to rent a car with driver service as well as shuttle service to and/or from the airport. There is also a fixed internet and a Wi-Fi connection in the hotel.

Visitors who want to savor a genuine Roman ambience can choose to stay at Hotel Borromeo. This three star superior hotel is located just at the city’s old center. The hotel is conveniently located within walking distance of the main attractions in the historic center of Rome, including the Colosseum and the Roman Forum, Moreover, it is also just a stroll away from the Termini train station and the subway (Cavour stop - Line B).

Just outside the hotel, you’ll have the opportunity to walk across some of the most charming streets in Rome. Shopping lovers will be pleased and surprised to find, just a few steps away from this accommodation facility, the large road named Via Cavour, and its amazing boutiques and shops. 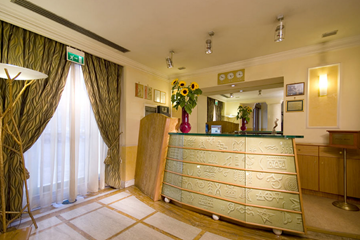 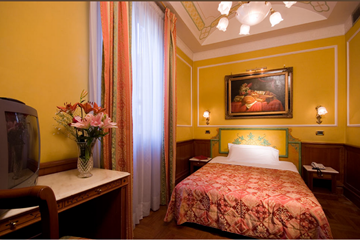 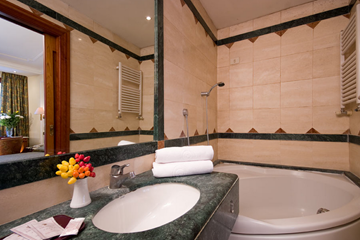 The Hotel Borromeo is the ideal destination for a romantic getaway or couples on their honeymoon. On the other hand, the hotel is also extremely family friendly and the perfect place to be for whoever is looking for a great time to relax, while enjoying Rome to the utmost level.

During the warmer seasons, the hotel also serves continental breakfast at their elegant roof garden. Here, guests can start their day enjoying the breathtaking view of the city, while having a fine breakfast.

The Hotel Raffaello Roma is likewise a three star hotel that is located at the historic center of Rome. When in Hotel Raffaello Roma, you will be completely surrounded by the atmosphere of the Eternal City. The hotel features a classy Italian style interior decor, with a palette ranging from gold, red and blue.

The hotel aims only for excellence in service and for superior customer satisfaction. This is why they offer exclusive services to their guests like Personal Concierge, which only a few hotels in Rome do offer. With the help of the Personal Concierge service, hotel personnel are able to inform their guests about important tips and ideas they need to know to make the most out of their stay in Rome.

Fine food lovers will be delighted to know that one of the highlights of the hotel is definitely breakfast time. In fact, the hotel picks only the best pastries, to ensure that the guests have the chance to experience and taste only the most deliciously flavored brown croissants, cocoa, marmalade and top crème. The hotel’s cappuccino is also superb. The hotel likewise serves eggs, fresh fruits and a special gluten free selection. 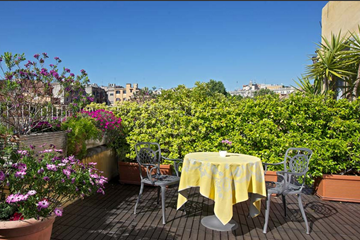 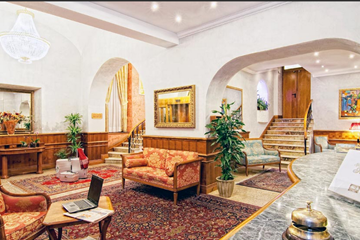 The hotel offers free fruit juice, coffee and water, available 24 hours a day. Guests can get their free pick-me-ups at the special corner set up by the hotel. The customers can likewise enjoy as many free apples as they want from this special corner. And during mornings, guests are welcome to have croissants.

In line with the hotel’s “Sweet dreams treatment” campaign, the hotel offers an a la carte menu where pillows ranging from classic, gold, cru and nature are enlisted. From this menu, every guest is given the chance to pick the pillow they want to use while in the hotel.

If you are looking for a peaceful haven at the heart of Rome, Hotel Lancelot is the perfect destination for you. This three star hotel run by the Khan family is located just a short walk away from the religious tourist sites and from the main sightseeing spots in the historic center of Rome, such as the Roman Forum and the Colosseum. It is very conveniently situated in the quiet and green Celio residential area, near the public transport. The hotel is ideal for a family holiday, tourist visits and for business meetings and gatherings.

The core value of the hotel’s service is excellence and hospitality. Their friendly and charming staff and management always ensure that each and every guest will be able to experience the utmost comfort and satisfaction during their stay in Rome.

Being warm and responsive to their guests is just innate to the English speaking Hotel Lancelot staff. They are known to be among the few hotels in Rome that offer not only luxury and comfort, but also a warm and cozy ambience to the guests. In fact, the good reputation and increasing popularity of Lancelot can be credited by the increasing number of recommendations the hotel received from popular internet travel forums and magazines. 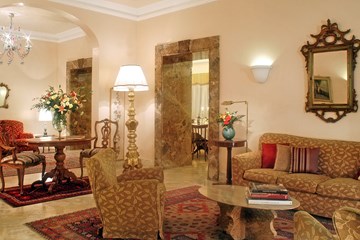 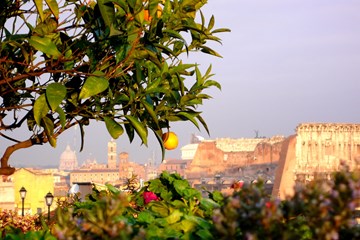 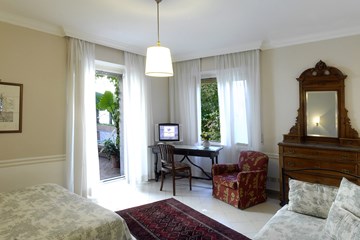 The Hotel Lancelot prepares elegant round tables in their dining areas rather than the traditional dining tables. This feature makes the Lancelot stand out from other hotels in Rome. During breakfast and dinner, guests from all over the world are given the opportunity to meet and greet each other while enjoying their meal sitting around the table.

Aside from the delicious free breakfast, the hotel also offers free parking and free high-speed internet connection at a supplement of 10.00 euro per day. Guests are also welcome to bring their beloved pets with them, as the hotel is a pet-friendly place. Just make sure that you notify the presence of a pet when booking.

The Residenza Maritti is located at the historic center of Rome, more specifically in an 18th century building that was built over the Roman ruins, just in front of the Arch of Pantani. The building was completely redecorated in 1999. From the hotel, you can be able to enjoy a view overlooking the relics of the Temple of Mars Ultor situated in the Forum of Augustus and a lookout to the square of Piazza Venezia.

The Residenza Maritti offers their guests quality accommodation, a warm welcome and the feeling of being at home. Every single day in the hotel guests will enjoy the superb hospitality of the hotel staff and management. 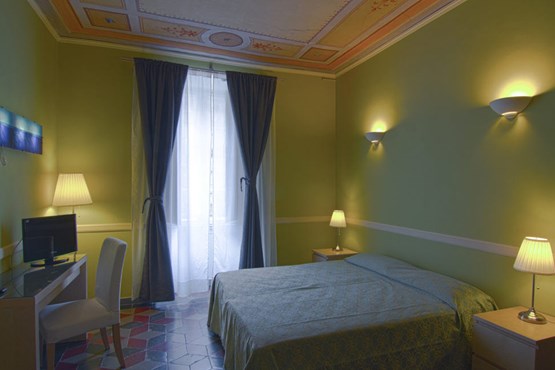 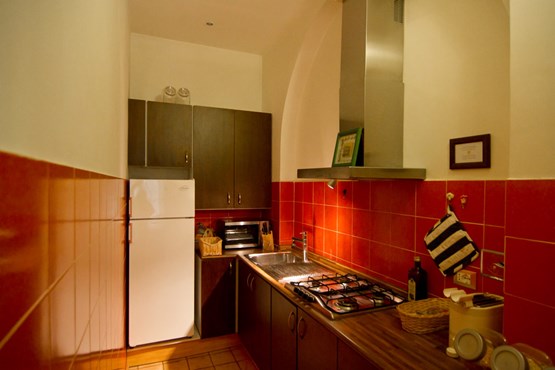 Each of the rooms in the hotel is well ventilated and fully air-conditioned, and equipped with a television. You can choose between contemporary suites, art decò style rooms and romantic, classic rooms. There are personal computers available for guest use with internet and Wi-Fi connection, as well as telephone and fax machines. There is also a kitchen and a living room that the guests can use for breakfast, free of charge. Animal lovers are also welcome to come with their cherished pets.

The reception area of the hotel, which is located on the ground floor, regularly stages cultural events like classical music and modern music concerts. There is also an exhibition space and a wine bar in the basement of the building.