Of the four papal basilicas in Rome, the St. John Lateran Archbasilica is the oldest. It is also considered as the main basilica and one of the seven pilgrimage churches. The other three papal basilicas are the Santa Maria Maggiore (St. Mary Major), St. Paul Outside the Walls, and St. Peter’s Basilica.

Inscription
On the front, there’s an inscription: “Christo Salvatori”, which shows the church’s dedication to Christ the Savior. Looking up, one can see a seven-meter tall statue of Jesus, and on his side are saints and doctors of the Church.

Constantine the Great
Constantine the Great, a Roman Emperor, donated the palace on Monte Ceilo to Pope Melchiades. It was formerly owned by the patrician Laterani family from which the basilica derived its name. It was called the Lateran Palace at first and it was where the Pope officially resided until the fifteenth century. In 324 AD, the basilica was consecrated by Pope Melchiades’ successor, Pope Sylvester I and it was he who dedicated it to Christ the Savior. 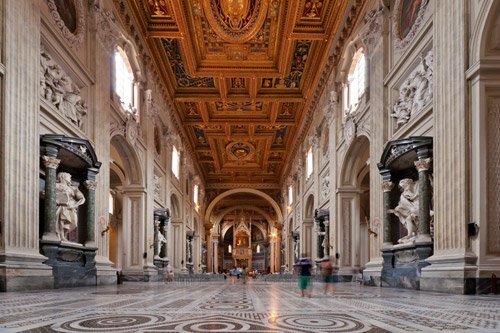 The doors of the main entrance are bronze and it came from the Roman Senate building that originally stood in the Roman Forum. There are twelve images in the church and these statues represent the apostles and disciples. The sculptures are made by Bernini while the frescoes are by Michelangelo.

Accordingly, the papal altar that stands in the basilica is part of a wooden altar where St. Peter, the first Pope, celebrated Mass. To date, only the Pope can celebrate mass on that very altar.
Behind the basilica is an octagon shaped baptistery. It is designed as such so that one could be completely submerged in water. The chapel was built in 432.

Holy stairs
Opposite the St. John Lateran is the Scala Sancta which translates “Holy Stairs”. According to legend, these were the stairs wherein Jesus climbed to Pontius Pilate’s office during his trial. The stairs were supposedly brought by St. Helena, the mother of Constantine the Great. The stairs will lead you to the Sancta Sanctorum (Holy of Holies) which is a personal chapel of the early Popes in the Lateran palace. This is also known as the chapel of St. Lawrence.