Tiber Island is one of the two islands in the Tiber River in Rome. It is located at the southern bend of the river. This boat-shaped island is attached to the rest of Rome by two main bridges known as Ponte Cestio and Ponte Fabricio since antiquity. The Ponte Cestio connects the south part of the island, which is at the right side of the bank, to Trastevere in Rome. It was founded in 46 AD and presently, only a few of its original parts had survived and continued to exist. The Ponte Fabricio, on the other hand, was built way back 62 BC and connects the northeast area of the island, which is the left side of the bank, to the Field of Mars in Sant’Angelo.

The other bridge that connects the island to Rome is the Ponte Garibandi which was built somewhere between 1884 and 1888. Unlike the two main bridges, Ponte Garidandi does not connect Tiber Island to the mainland of Rome. 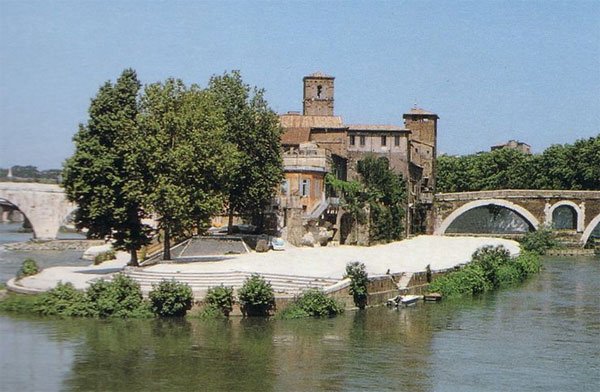 The island’s size is 270 meters in length and 67 meters wide measured at its widest spot. Its shape ensembles a boat figure. During ancient Rome, the island was used for crossing the river. It was also during early Roman era when a travertine embankment wall was built around the island forming a shape of a prow, with stern at each end.

The Temple of Aesculapius
Rome had experienced a terrible plague in 293 BC. Because of this, the Roman Senate consulted the Sibyl about the possible solution to the problem. As the Sibyl suggested, The Roman Senate built a temple in honor of the Greek god of medicine and healing, Aesculapius. The senate wanted to have the temple isolated so it would be difficult for the plague and some other contagious ailments to influence the temple. Because of this, they had chosen the Tiber Island as the best place to isolate the Temple of Aesculapius.

Presently, the Temple of Aesculapius does no longer exist. In 998 AD, a basilica was built over the ruins of the temple site. The basilica, which is now known as San Bartolomeo, was commissioned by Emperor Otto III and was built in honor of the martyr Adalbert of Prague. Since the original Aesculapius was wrecked, the Roman government built a hospital on the western area Tiber Island in 1584 in order to keep the theme of healing of the island.