The Great Synagogue was designed by Vincenzo Costa and Osvaldo Armanni. It was built between 1901 and 1904. The attention-grabbing ArtDeco design was a deliberate choice to celebrate the new found freedom of the Jewish community in Rome.

Rome was known as a Jewish community in the 2nd Century BC. During the reign of Victor Emmanuel II as the king of Italy, he granted the Jews of Rome full citizenship. Because the old synagogue was demolished, the community began to make plans for a new place of worship. You can find the Great Synagogue at the edge of the Jewish Ghetto on the banks of the Tiber. 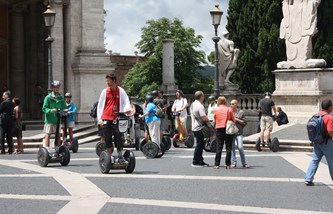 The Rome Segway Tour has the advantages of walking or biking sans the hassle and plus the excitement. The Coolest Ride of the 21st Century. Read more......