Situated next to the Aurelian Walls and adjacent to one of the gates of the Imperial Era (Porta del Popolo, formerly Porta Flaminia), this square is one of the largest in Rome, with a surface area of approximately 17,000 square meters. It’s a great starting point for a beautiful Roman walk.

Arriving at the metro stop, the most common way to enter the square is through the same path that Romans walked during the Empire: the city walls door, which was completely restored in the middle of the sixteenth century.

The external facade of the wall's gate and the internal one are completely different. Externally, the door features four columns coming from the former St. Peter’s Church. The internal project was created by the famous architect Gian Lorenzo Bernini, in honor of Christina of Sweden, the queen that gave up her reign, converted to Roman Catholicism and moved to Rome, where she devoted her life to charity, art and music. At the top of the door, there is an inscription, commemorating her arrival in 1655.

Once you’ve passed the door, the view will be breathtaking. In front of you, behind a tall obelisk, you’ll see the famous “Trident”, namely the beginning of the three roads departing from the square and arranged in a fan shape, and two identical churches, called the “twin Churches”.

If you turn to the left and look up, you’ll have a view (from below) of the Pincio Terrace, which is one of the favorite spots to take a postcard-style picture. On this terrace, the best moment for a perfect shoot is during the late afternoon, when the sun lights up the rooftops and churches’ domes. The terrace is also a meeting point for many locals, and it is considered to be one of the most romantic spots in town. 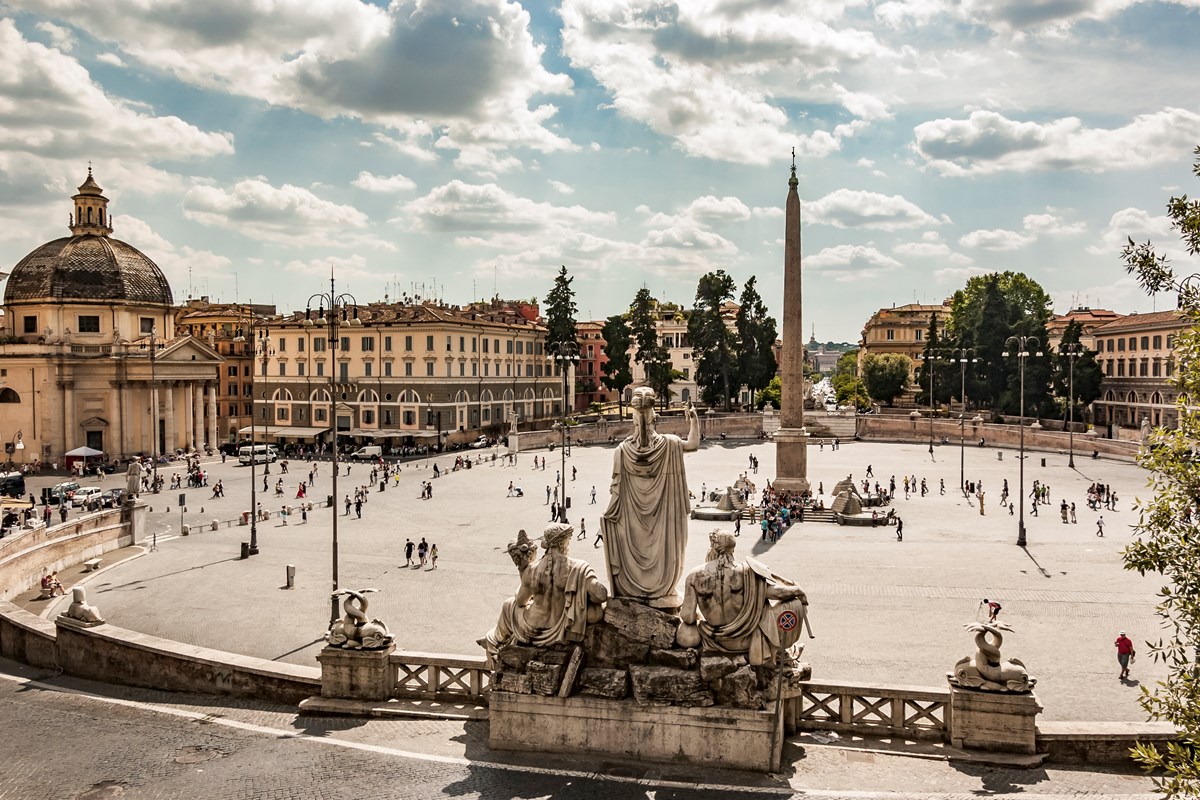 Over the centuries, the square of Piazza del Popolo has undergone many restorations and modifications. The current structure is credited to the architect Giuseppe Valadier, which completely re-shaped the place at the beginning of the nineteenth century. The architect is famous in Rome because of the stunning villa in the Borghese park that is named after him: the Casina Valadier, which today is an elegant and exclusive cafè, lounge bar and restaurant.

What To See and Where To Go

These two buildings are a unique example of “twin churches”. They look identical from the outside, but, as you walk in, you’ll notice the main difference: the church on the right is circular, whilst the other has an elliptical floor plan.

Originally, Santa Maria dei Miracoli (Holy Mary of the Miracle) was a small fresco of Mary situated next to the river. The miracle referred to a divine intervention (around 1300) during the rescue of a child from the river. In 1675, under request of the Pope Alessandro VII, a church was built to commemorate the miracle. Today, the church of Santa Maria dei Miracoli (the one on the right) houses a copy of the original image.

Santa Maria di Montesanto (on the left) is commonly known as the “artists’ church”, because the funeral services of famous show business personalities are traditionally held here. 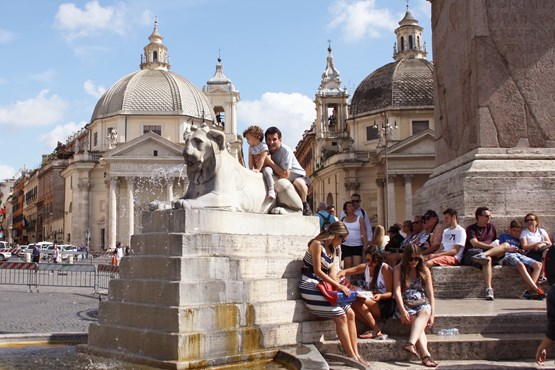 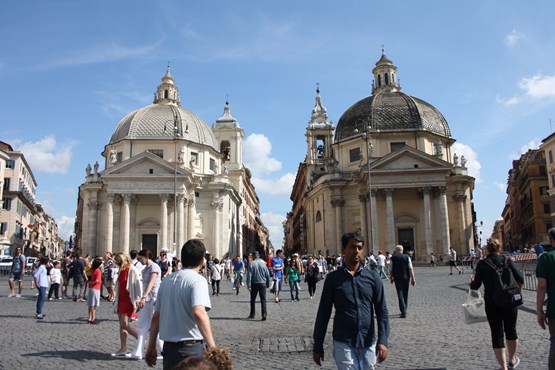 The first structure of the church dates back to the year 1100, but the building was totally rebuilt in the Renaissance. Later on, in the Baroque period, it was re-designed by Gian Lorenzo Bernini. Inside, amongst many other art treasures, you can admire the Chigi Chapel, with sculptures and paintings by Raffaello and Bernini. In his youth, long before the schism, Martin Luther had his residence in the monastery that was situated next to the church.

After leading a victorious military campaign in Egypt, the Roman Emperor Octavianus Augustus brought this obelisk (dated 1300 BC) to Rome, in the year 10 AD and placed it in the Circus Maximus. The monument, 36 meters in height and dedicated to the sun deity, was brought down and broke into three pieces during the Barbarian invasions. It was recovered only during the Renaissance and placed where it is today. 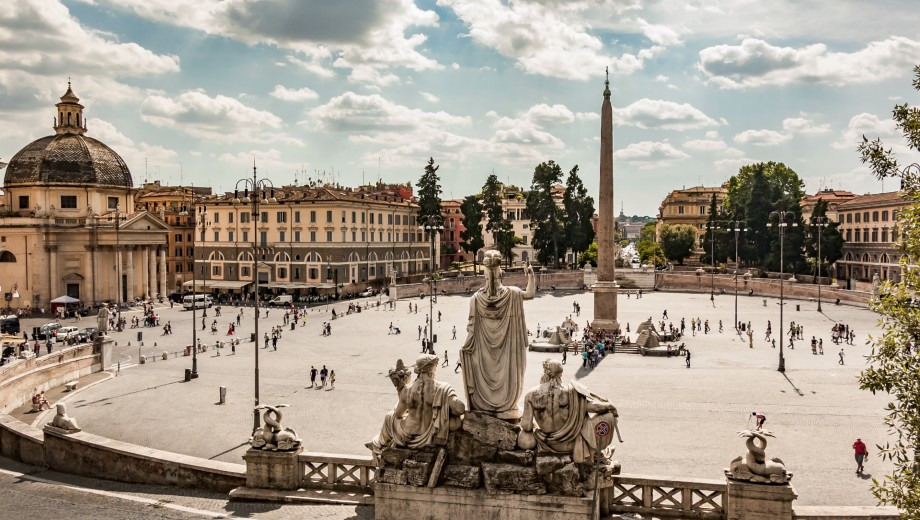 The Fountain of the Lions

The architect that took care of the square’s major renovation, Valadier, decided to carry a 300-year-old project that originally belonged to Sisto V, the same pope that brought the obelisk to where it is today. Valadier built four fountains featuring as many Egyptian style lions, which are placed at the corners of the obelisk.

The Neptune Fountain and the Goddess of Rome Fountain

Coming from the Aurelian Walls, you’ll see two fountains: one on the right (the Neptune Fountain) and the other on the left (the Goddess of Rome Fountain). The two fountains have the same structure: only the central body is different and, together with the twin churches, they bring a sort of sense of symmetry to the square, something that is quite unusual in Rome. The Neptune Fountain features the god of the sea, tritons and dolphins, whilst the other one depicts a goddess representing Rome and two statues (the city rivers Tiber and Aniene). At the bottom, there is the crest of Rome: the Lupa (the she-wolf) feeding Romulus and Remus, the two founders of the city. 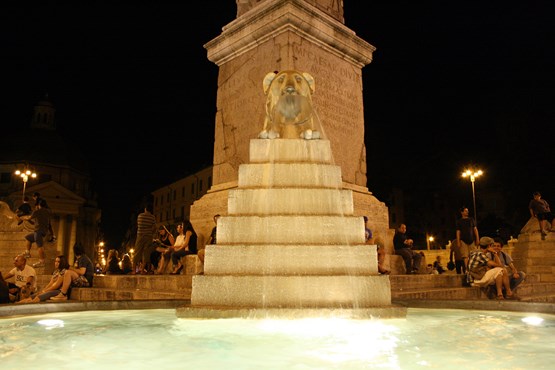 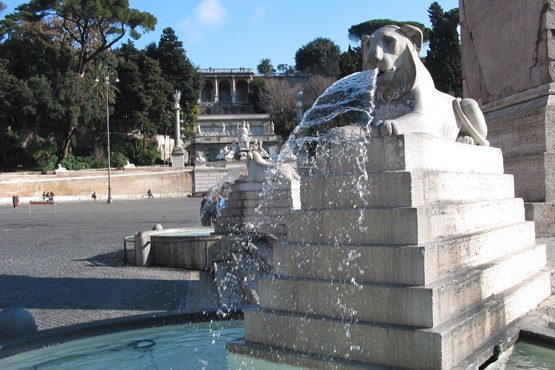 The three roads departing from the square are Via del Babuino (left), Via del Corso (center) and Via di Ripetta (right). They may look quite similar at the beginning, but they are extremely different in nature. If you want to head straight to the Spanish Steps, choose the left one. Via del Babuino will take you there in about 10 minutes, but if you are an art lover, we suggest you take a short detour towards the beautiful road, running parallel, behind the street, called Via Margutta, which is famous among modern and contemporary artists and has had prominent residents such as Renato Guttuso (painter and sculptor) and the film director Federico Fellini. Here, set in seventeenth century buildings covered in greenery, you’ll find private galleries and art shops.

Via del Corso, which ends in Venice Square, is perfect if you are willing to experience some serious shopping. You’ll find famous brands as well as more affordable boutiques. Via di Ripetta (the road on the right) was built in ancient times and, around the year 1000, was the access to a semi-circular shaped port on the river Tiber, made out of marble steps. The port was destroyed, around 150 years ago, to build the walls that protect from the frequent river floods.

The fountains testify how Rome has always been rich in pure spring water. In fact, in the historic center alone, there are approximately 280 small fountains with drinking water for public use (commonly called “nasone” for the nose-shaped curved tap). If you consider the whole territory of the city of Rome, the number of fountains reaches 2,500.

The Piazza del Popolo Square between History and Myth

Through the centuries, the “official” history of Rome has been narrated by prominent academics in extensive studies based on facts and unmistakeable evidences. Despite this, the legends surrounding the city are numerous and intriguing. Sometimes, the border between truth and myth becomes blurred.

Around 1100 AD, under request of Pope Pasquale II, the square was named after the Basilica of Santa Maria del Popolo, the church next to the Aurelian Walls. In Latin, the word “populus” also means poplar trees: this could indicate that the name derives from a bush of trees close to the Domizi sepulchre, where the remains of Nero where buried. This burial site, belonging to the Imperial Era, was located where the church is today.

Legend has it that the restless ghost of Nero used to wander around the city walls, where he would meet with evil creatures and witches under a secular tree. Therefore, the sepulchre (and the tree) were destroyed by Pasquale II, who addressed the concerns regarding a popular superstition: the crows gathering on the tree were demons waiting for the reincarnation of the evil Nero. The belief that the Emperor would rise from hell was extremely widespread among the population as well as among the Christian intelligenzia of the time. 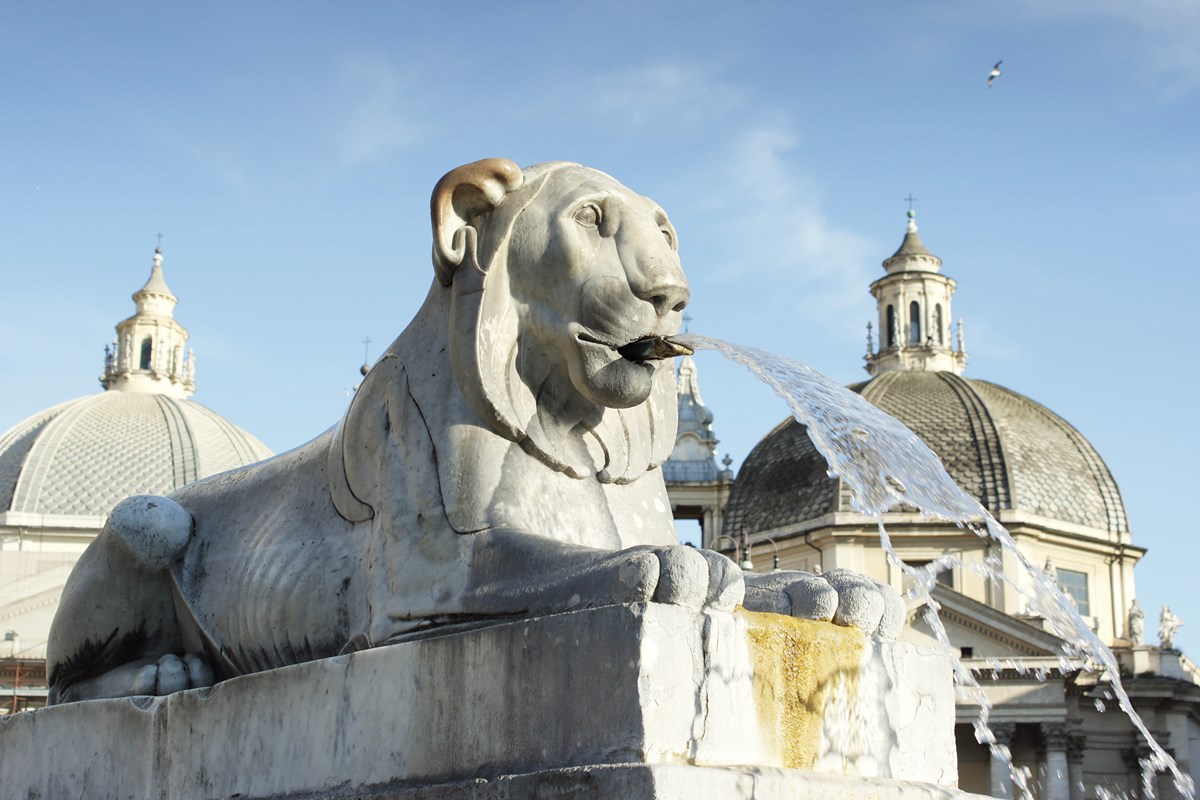 How to Easily Get to Piazza del Popolo

The square is well connected with the rest of the city. The easiest way to get there is by getting off at the Metro “A” Flaminio – Piazza del Popolo stop. Depending on where you come from, you can also arrive by the Roma Nord train, by tram (line 2) or by catching one of the many buses stopping at the adjacent Flaminio Square, on the other side of the Aurelian Walls.

Above the square, the park of Villa Borghese offers an easy shortcut to get to Via Veneto. You will just have to walk up to the Pincio Terrace, and then head right, towards another entrance of the park, called Porta Pinciana.

What is Piazza del Popolo?
Piazza del Popolo is one of Rome’s main squares. Loacated between Via Flaminia, Via del Corso and Villa Borghese, in the past marked the city’s entrance.

What can I see in Piazza del Popolo?
In Piazza del Popolo there are three churches (the Basilica of Santa Maria del Popolo and the so-called twin churches), an Egyptian obelisk, and three fountains. Plus, the square is next to the Pincio Terrace and the popular Via del Corso.

What are the twin churches in Piazza del Popolo?
The twin churches are two almost identical churches called Santa Maria dei Miracoli and Santa Maria di Montesanto. On the outside, they look exactly the same, but on the inside they have two different floor plans: the first is elliptical, while the other one is circular.

Why is there an Egyptian obelisk in Piazza del Popolo?
The obelisk was brought to Rome by the Emperor Octavianus Augustus after his military campaign in Egypt in the year 10 AD. Originally placed in the Circus Maximus, it was brought down during the Barbarian invasions, then later recovered during the Renaissance and placed here. Piazza Venezia and Venice Square is a square in Rome where four major roads meet. Piazza Venezia is located at the foot of the Capitoline Hill. Read more...... The Aurelian wall is the city wall of Rome. You can learn more about the history and the construction of the wall in Museo del Mura. Read more......