If you’re looking for a magical and off the beaten path place to visit during your Italian holiday, the Garden of Ninfa is the place for you. Often dubbed the most romantic garden in the world, this place feels like a faraway land of enchantment. The Ninfa Garden Italy (and the village it takes its name from) is located 64 km southeast of Rome, at the base of the Lepini Mountains. Its balance of nature made the Lazio Region declare it a Natural Monument. Besides being the perfect day trip for couples, it’s also a great resting place when traveling between Rome and Naples. Because of its lovely lakes, colorful vegetation and beautiful medieval ruins, Ninfa Garden is no less than a dreamy place to visit.

Back in the Roman era, in the current village of Ninfa stood a temple dedicated to the goddesses of spring water, the Naiad Nymphs. Back in those days, Romans believed that nymphs dwelled by springs and rivers, hidden in groves and grottoes. And there’s plenty of that to go around in the Giardino di Ninfa!
Fast forward a couple of millennia, and the area has retained its name, though not much is left from that time. Today’s Ninfa Garden mainly consists of flowers and plants that grow abundantly on the medieval ruins of the village. 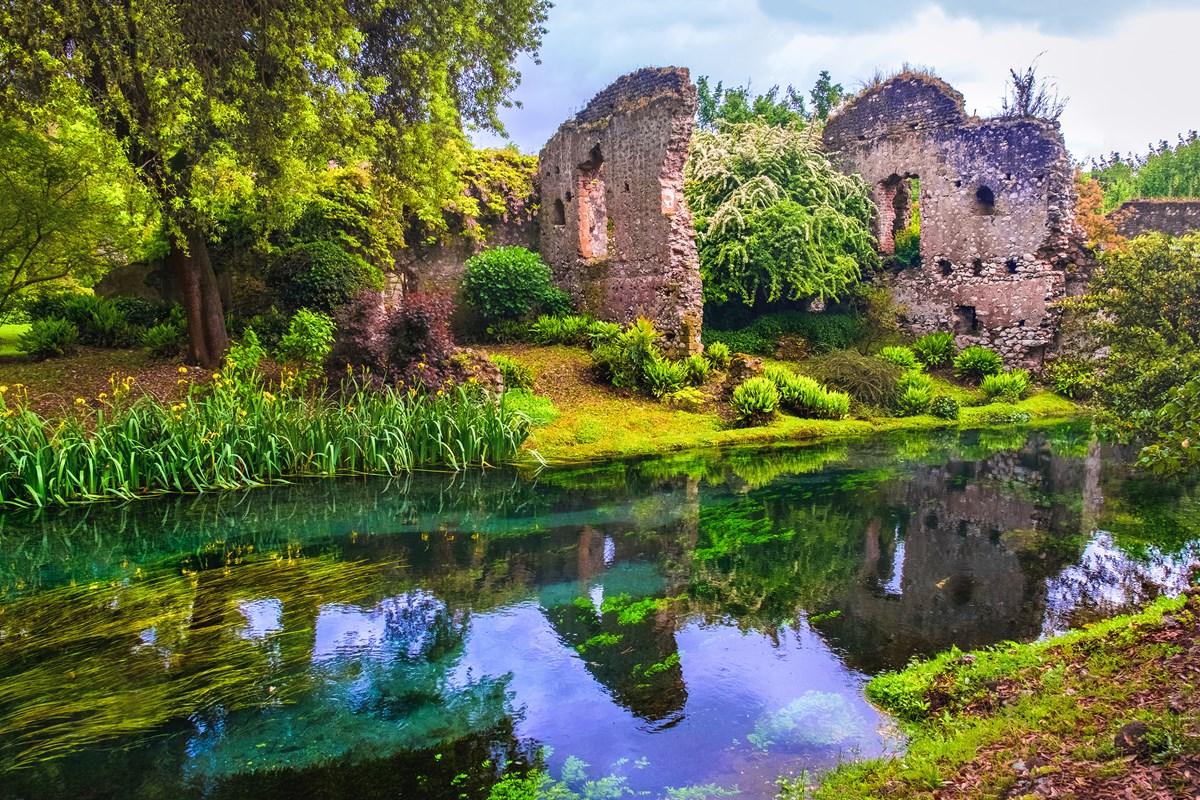 The Garden of Ninfa Through the Ages

The village of Ninfa was founded during the Roman times, and it was a rich town in the early centuries of the Middle Ages. A lot happened during the 12th century, as Pope Alexander III was crowned there and decades later the Holy Roman Emperor Frederick Barbarossa sacked and burned it down. Still, the town bloomed again with over 100 homes, a few churches, mills, bridges, a town hall and a castle. Huge guard towers stood outside the gates, protecting the village. However, it was later destroyed in the 14th century.

Ninfa wouldn’t bloom again until the 16th century, under the seigniory of the feudal lords of Sermoneta, the Caetani family. However, the town seemed doomed, as a malaria outbreak caused villagers to abandon the territory once more. For centuries after that, Ninfa mainly remained a sleepy farmer village.

It wasn’t until the 20th century when the Caetani family decided to take matters into their own hands, turning the ruins of the near-vacated village into a botanical garden. Marguerite Chapin, an American aristocrat who married into the family, was in charge of the project. She was the one who decided on the lovely trees and flowers, with all its pools of water and fountains, and rose varieties. Modeled after the Anglo-Saxon style of gardens, Ninfa became one of the most glorious places in the region, perfectly uniting lovely flora with the medieval remains of Sermoneta.

The ruins became a stunning spot for garden enthusiasts and for people who are seeking for a good ambiance of nature. Lelia Caetani, one of the successors, was the last owner of the botanical garden. Before leaving, she appointed the Roffredo Caetani Foundation, named after Marguerite’s aristocratic husband, as new managers for the estate.
The Garden of Ninfa is considered the most romantic garden in the world. This exquisite garden is brimming with rare plants, and all kinds of colors. The gleaming waterfalls also add up to its beauty, like a sort of hidden forest. The roses and other lovely flowers scrambling along the ruins of the village give an indescribably impressive ambiance. In all, it’s a dreamy romantic getaway. 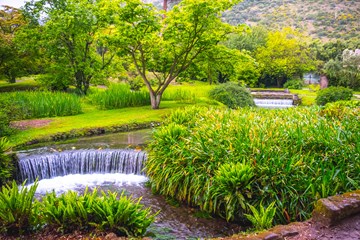 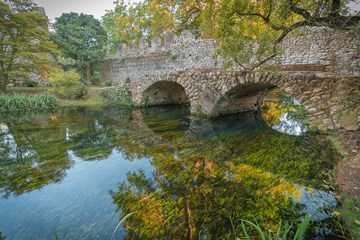 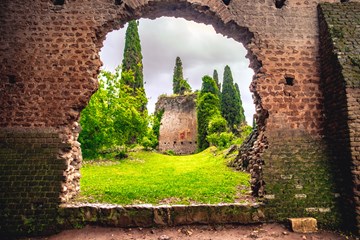 How to get to Ninfa

Getting to Ninfa is quite challenging but what you can see in the garden is quite satisfying and worth your effort. Keep in mind that the village is a little away from Rome, so it’s more of a day trip outing. There are essentially two transport options to reach the Garden of Ninfa: by car or by combining train and taxi. You’ll find some more information on both of these options, below.

The best way to get to Ninfa is by car. In case you don't have one, you can easily rent one in Rome. You can take the road S.S. 148 from the ring road in Rome GRA - Grande Raccordo Anulare, Exit n. 26, and continue driving to the junction for Borgo Bainsizza. You'll find wide parking at the Ninfa entrance for cars, coaches and even campers.

If you're not excited by the prospect of renting a vehicle during your Roman holiday, you can also get to the garden by train. Head to the Roma Termini railway station and take any regional or intercity train with a stop in Latina Scalo. Once at the Latina Scalo station, you’ll be 7 km away from Ninfa. Take a taxi at the station and it'll take you 10 minutes to get there.

• Address. Via Provinciale Ninfina 68.
• Schedules. As many outdoor venues in Italy, opening hours vary depending on the time of the year:
• Between March and June, it’s open from 9:00 am to 6:00 pm.
• Between July and September, it’s open from 9:00 am to 6:30 pm.
• Between October and November, it’s open from 9:00 am to 3:30 pm.
• Tickets. Full price is €15, including a tour of about one hour. €8 for visitors with disabilities plus one caregiver (friend, relative, etc) but they can only pay on arrival. €12 for members of the Fondo Ambiente Italiano (FAI), Lazio YOUthCard – EYCA, Società Dante Alighieri, showing valid membership cards at the ticket office. Entrance is free for accompanied children under 12 years of age. Visitors can also choose to pay a €2 for the Hortus Conclusus fee at the entrance. There’s an online booking fee of €0.50, and tickets can only be used for the chosen date, with no refunds.
• Tours. There are English Language Tours and bilingual tours available, and you can request more information about them at the entrance
• COVID-19 measures. While the sanitary emergency continues (at least in the months the garden is open), the Roffredo Caetani Foundation is asking visitors to enter with masks and gloves. They’re also taking visitors’ temperatures at the entrance.

What is the Garden of Ninfa?
It is a beautiful botanical garden created in the style of Anglo-Saxon gardens. With a feeling not unlike a fairytale place, a medieval village once stood in the area. Now, it combines natural beauty with the medieval remains, with its beautiful stone walls.

Where is the Garden of Ninfa?
It is in the town of Cisterna di Latina, province of Latina, central Italy. The address is Via Provinciale Ninfina 68.

How much are tickets to Ninfa Garden from Rome?
Full ticket price is €15. Reduced rates can be €8 or €12, and children under 12 come in for free and do not need to be booked.

How can I get to Ninfa Garden Italy?
If you go by car, you can take road S.S. 148 from Rome's ring road. To go by train, leave from Roma Termini and take a regional or intercity train that stops in Latina Scalo. You can then take a taxi for a 10-minute ride. 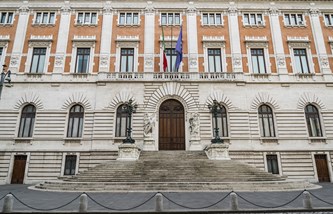 Palazzo Madama is the palace of Rome. The palace was named after Margaret of Parma, the illegitimate child of Emperor Charles V. Read more...... 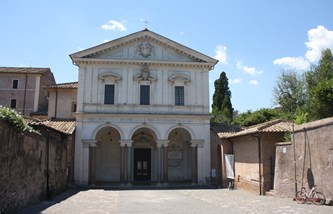 The Basilica of St Sebastian Outside the Walls owes its name to the fact that it was located outside the city’s walls built by the Emperor Aurelian. This church is also known as the Basilica of Saint Sebastian near the Catacombs. This basilica is often referred to by the Italian name: San Sebastiano Fuori le Mura. It is located on one of the ancient Roman roads: Via Appia Antica. Read more......