The History of Plumbing- Pompeii and Herculaneum

The excavation of the Archeologists in Pompeii and Herculaneum, which started in 1758, uncovered many ancient Roman buildings all throughout the lands of the Roman empires. Relics of walls, aqueducts, palaces, forts, theaters, hospitals, ordinary homes and temples were also found.  These excavated cities had helped us to better understand the Romans’ way of life during ancient times.

Romans were not only known for being the pioneers of the new building designs and materials but also for their avant-garde water channels. They were also known to be great water engineers. They had devised a great number of raised channels to bring water from the water sources of distant mountains and hills into towns and cities. They had also invented water pumps with valves. The Roman valve helped in pumping water supply uphill. The pumped water then went into the high tanks that were located above the fountains. From the tank, the water then came out of the spout through gravitational pull.

Overview of the Pompeian Plumbing

As early as ancient times, Pompeii plumbers already had a booming profession. They were always busy as there were constant demand for pipes, bronze valves and wiped joints. There were also stable orders for gold, silver and marble opulent fixtures. Among their major works was molding and fabricating lead gutters for the richest Pompeian private homes. The Pompeian homes, in general, were built with open-roof design and an atrium. There was usually a tank on the base part of the house which was used to collect the rainwater that had fallen down from the tiles of the roof.

Pompeii plumbers fashioned the pipes by pouring liquefied lead into sheets with various dimension and thickness. The liquefied lead will then be stored in an open-air to let them cool. When the sheets were cool enough, plumbers then formed the sheets around the wood’s core. A V shaped opening was also left so that the ends of each of the molded sheets would meet and fit each other. The plumbers then formed a clay or sand mold all around the channel. Once molding was done, the hot lead will then be poured into the opening. The typical pipes during ancient times were elliptical or egg-like in shape.

During early Roman times, only the richest Pompeian homes were able to get constant supply of running water. Each of the private homes paid their water supply based on the size of the nozzle they used. Ordinary people, on the other hand, needed to drink and fetch water from the public fountains.  The water was being carried to different homes through the lead pipes. The utilization of the lead pipes had not only helped in the carriage of water but also had greatly improved the sanitary conditions of the city.

The Romans’ ancient plumbing systems were among the most advanced in the world and were considered a huge part of the city structures. In fact, their water supply systems were so advanced that no one had anything better until 1800s. The invention of the Roman aqueducts also paved way in the development of underground sewer systems. The largest known sewer that was built in Rome during ancient times was the “cloaca maxima”. It was wide and high enough that even a horse with its cart could be able to drive through it.

Out of the development of the ancient Roman water supply systems, the Roman engineers were also able to construct public lavatories. Although these lavatories were convenient enough, they were never private. These were designed in a way where the users had to sit side by side on the arranged rows of seats.

The bath room of the richest Pompeian private home was literally a room with a pool. Generally, the entire floor of the room was filled up with water. In modern times, this is called a small sized swimming pool. Marbles were primarily used as the wall lining. There were also three to four complementary marble steps which served as the stair case that connected the surface area and the submerged concrete floor.

The whole bath room was regulated by a certain kind of damper system. Both the water and the air that circulated around the room were heated to achieve the desirable temperature so as to add comfort to the bath users. The hot air was drawn from the adjacent furnace on the piers of bricks of which the entire floor was rested. There were also hollow terra cotta tiles, used to line all the sides of the walls so the heat could easily pass through.

There was also a built in plug in the bath. This would allow the users to empty the bath. Normally, the bath was emptied and refilled once or twice a day depending on the usage.  The pipes used were also built to last.  They may be fashioned with lead or perhaps with tiles submerged in the ground area. Mostly, when tiles were used, they were planted no less than a foot deep. The submerged tiles were then covered with a very solid concrete floor.

According to the archeologists, they had excavated a sort of bath complex in the Pompeii area. This complex was said to measure almost a mile in perimeter- big enough to be considered as the second largest complex next to the amphitheaters.

The Herculaneum catered only the most powerful and the richest among the riches families. It was a very expensive resort, in fact, more expensive than the events in Pompeii. The exquisitely designed mosaic in the bath of the women as well as the murals on the walls were said to be superior to those of Pompeii.

Initially, the concept of the Roman public bath in the ancient times was generally comparable to the country club in the modern generation. It was a special place where people socialized. It was where they meet their friends, enjoy playing games, eat a great meal and have an exercise in the gym. It was also in the public bath where people spend a bit of their luxury time enjoying a series of relaxation baths- warm, hot, cold and tepid baths.

Romans during Julius Caesar time in 100-44 B.C were so conservative especially with the issue of gender mixture. During this time, women and men were not allowed to bath on the same room. There were separate bath times for men and a separate bath for women as well. Each of these separate baths was set a couple of hours. Romans usually bath stark-naked. Other women, however, would use a cap to secure their hair and their pearl neck lace.

On the later times, this rule was modified. Both men and women were then allowed to go on one bath at the same time. Both sexes would also bathe without their clothes on. There were just two main new rules added this time. The first rule was “don’t stare” and the second one is “act as if you were all dressed up”. These two rules were strictly implemented. Those who violated the rules were asked to go out of the bath immediately and were then disallowed to enter the bath once again.

Roman spas during the ancient times were always associated with luxurious lifestyle. This lifestyle had overwhelmed even the Romans themselves.  At first this setting was well and good. However, as Rome degenerated, the bath likewise degraded over time and became a place for debauches and immorality. 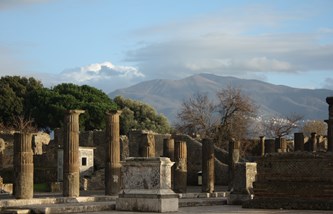 Another interesting spot you can visit near the Eternal City is Pompeii. Which is the best preserved and the largest historical city in the world. Read more...... 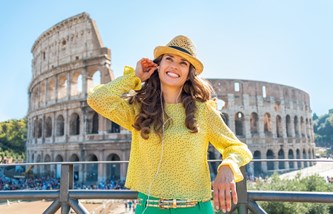 When visiting Rome or any other Italian city it comes in handy if you speak a few basic Italian words. In this free video course you & ll learn these basics Read more......